A Colorado Firefighter Built His Own Shipping Container Home, And Found A New Calling Along The Way 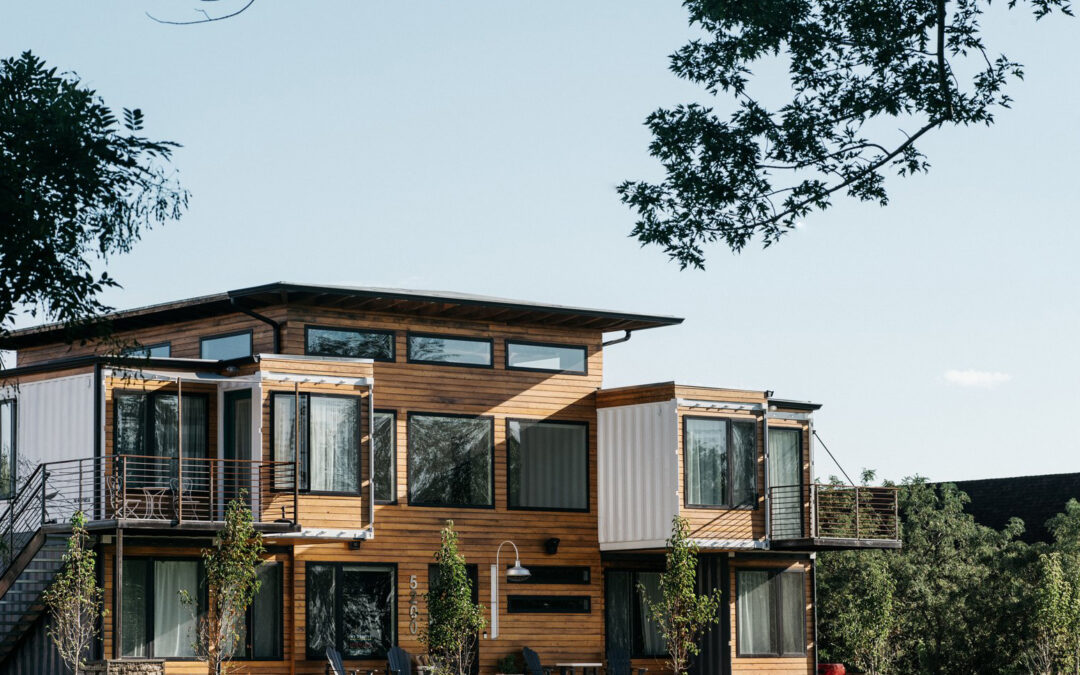 Making a house out of shipping containers sounds easy enough: Just snap up a few neglected boxes from a local junk dealer, rack ’em and stack ’em, and create a bit of old-school prefab magic.
But recycling the detritus of global shipping has its complications. Like how to turn corrugated steel boxes that measure an awkward eight feet wide and 40 feet long into something cozy enough to call home. Or how to keep their metal floors from vibrating when you walk on them, or prevent the chemicals they are treated with from being released into the air. Or, perhaps most important, how to assemble it all so it doesn’t look like you live in the storage yard of the local port authority.

Luckily, Regan Foster likes a challenge. He’s an extreme DIYer and, until recently, a firefighter, the kind of guy who is used to working 24-hour shifts and given to starting his day with a plunge into an outdoor ice bath. The house he designed and built with his wife, Libby, located just outside the Denver city line in Adams County, harnesses nine shipping containers into a 3,840-square-foot structure that’s meant to be shared with friends and neighbors. “We believe community and family are a strong part of living a life well-spent,” Regan says.

In all, the house has seven bedrooms and five bathrooms, including an in-law suite with a separate entrance where Libby’s mother lives. Four of the containers are placed on the ground—side-by-side in pairs set 24 feet apart—to form the first floor. Another four are stacked above them, some shifted forward, to create a cantilevered second story. The ninth container sits perpendicular at the back of the second level to form a U-shape. The house is enclosed in front with a conventionally framed wall and on top with a flat roof supported by exposed joists.
In the voluminous great room, the ceiling rises to 25 feet. The space feels even larger thanks to a sliding glass wall that connects it to the back patio, which Regan outfitted with a grill, a prep countertop, and benches he built using chunks of concrete slab saved from the demolition of a small house that formerly stood on the lot.
Regan acted as general contractor and consulted with architect Joe Simmons of BlueSky Studio on the design. “When we first met, he gave me a diagram,” says Simmons. “He pretty much had it all figured out.” In fact, after the project ended and Regan earned his GC license, he retired from the fire department to pursue opportunities in real estate and construction. (The family also rents the house on Airbnb from time to time.)
Together, the pair solved structural questions. Although shipping containers stack easily and some can handle loads of more than of 50,000 pounds, Regan and Simmons had to reinforce theirs in places where they cut out windows and doors. They also reduced vibrations along the length of the containers by welding additional steel plates to the C-channel base structure to make them more rigid.
Regan, whose resumé includes furniture maker, did much of the interior himself. He laid the floors in hallways using various materials, including recycled barn wood and boards he fashioned from a catalpa tree a friend cut down. He turned a walnut slab into a sliding door and built a set of stairs from parallel strand lumber that leads to a cantilevered walkway that runs the length of the second floor.
To avoid any eventual off-gassing from the treated wood floors that came with the containers, Regan replaced them with stained, sealed plywood finish flooring and installed a heating system beneath.
But he was careful not to ruin the industrial charm of the containers. The inside faces of the exterior walls are layered with insulation and drywall, but many of the interior walls and ceilings remain exposed, with the painted, corrugated metal showing the inevitable minor dents accrued during the boxes’ previous lives.
The house and yard are regularly the site of social gatherings, and the Fosters recently hosted an event for CrossPurpose, a nonprofit that supports career training for those in need.
“Every day a voice in my head says, ‘You have one life to live, how are you going to live it?’” Regan explains. “So this house is just another stepping stone in a life full of curiosity and adventure.”